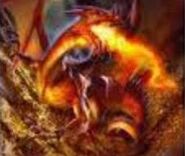 Known as Slathbog the Red, he is an evil dragon who conquered Varlo in the realm of Vargland many centuries ago. He has been gathering and hoarding treasure since that time, and like most evil dragons, will eventually seek to expand his treasure and kill more people. He destroyed at least five cities, probably more.

He is full of dark thoughts, hatred, and madness. Though a creature of incredible beauty and power, he had no happy thoughts and was driven by a lust for wealth and pain. He longed for happiness but could not obtain it, and in his heart he was full of fear.

He was killed by Alex in Slathbog's Gold, and his body was later incinerated by Alex. He also nearly fatally wounded Tayo.