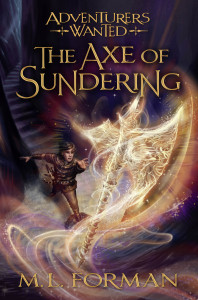 Whalen Vankin appears in Alex's house and tells Alex that he has found his old apprentice Jabez. Jabez is in the Westland of Jarro, creating an army. Whalen and Alex split up and rendezvous in Jarro. They join a caravan traveling through Midland, keeping their magic disguised. They sail across the sea between Midland and Westland. They arrive in the port town of a kingdom opposed to Jabez. They meet sea elves, and Alex heals the king from the spell Jabez put upon him. The kingdom marches to war while Alex travels to the castle where Jabez is hidden. There, Alex recovers the Axe of Sundering and uses it to kill Jabez.

Immediately thereafter, Alex and Whalen are sucked into an in-between dimension as prisoners of The Brotherhood. It is revealed that Gaylan, the leader of the Brotherhood, is going to use the Axe of Sundering to break The Wall between the living and the dead and allow his old master to return. The attempt is successful. Salinor appears and gives Alex the power to fix the problem, which Alex does. Alex is then named as Guardian of the Wall. He returns with Whalen to Jarro to help in the reconstruction of Westland.

This book has some firsts:

first adventure travelling with another wizard

Retrieved from "https://adventurerswanted.fandom.com/wiki/Book_5:_The_Axe_of_Sundering?oldid=5832"
Community content is available under CC-BY-SA unless otherwise noted.