Book 4: The Sands of Nezza—Chapter Summaries 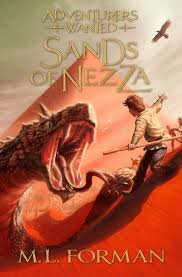 Chapter summaries for Book 4: The Sands of Nezza

Note: At the beginning of the book, one year Earth time and nearly five years Known Lands time has passed since Alex first became an adventurer.

Alex receive a plea for help from Skeld to rescue him in Nezza. Alex travels to Telous to get information and supplies. 1 day ABA

Alex travels into Nezza, encounters a magical wall preventing people from returning to the Great Arch, and avoids a company of soldiers. Three soldiers find him later and he learns about the situation in Nezza. He finds the home of a retired adventurer, Josephus Sebastian Savage. 2 days ABA

Alex finds a message from Savage and seeks him out. He finds him and learns more about the situation in Nezza. 2 days ABA

Alex and Savage fight and defeat two Stoics. Alex makes some hypotheses about the Order of Malgor and the conspiracy in the Known Lands. 3 days ABA

Alex departs Savage and arrives in Karmus, locates and infiltrates the dungeon, and finds Skeld and his company (with one adventurer having already died). Alex puts the company in his magic bag and prepares to flee the dungeon. 5 days ABA

Alex escapes the dungeon and finds Magnus’ room. There he finds a lockbox, Scrying Orb, and a letter from The Brotherhood, all of which he takes. While escaping the Magnus’ tower, he finds Rallian and takes him along. 6 days ABA

Alex and Rallian travel west from Karmus. They stop, and Alex takes the company out of his bag. They all rest and recuperate. 7 days ABA

Alex, Rallian, and the company decide to seek the oracle Tempe, across the western Red Lands. They depart and find a river that sometimes flows and sometimes is dry. Alex breaks the old magic and the river flows again. 9 days ABA

The company travels into the Red Lands. Rallian is lured away by a giant serpent, and the company goes to rescue him. Cameron Dix is killed, and Alex captures the serpent, killing it after getting information. The company continues west. 11 days ABA

The company arrives at the pyramid of Tempe. Alex meets with her and they discuss Nezza and The Brotherhood. She later meets with each of the company in turn, and reveals to Alex the nature of the ring he found in the troll’s cave on his first adventure: it is the Great Ring of the Kings of Nezza. 14 days ABA

The company departs Tempe and heads east. They leave the desert, take horses from soldiers, and head northeast. About 5.5 weeks ABA

The company nears the lands of Lord Talbot, and Rallian shows them a secret path to avoid enemy patrols. Thomas Aquil is revealed as having healing powers and some magic, and Alex agrees to teach him. About 5.5 weeks ABA

The company crosses the mountains and enters the northern plains. They continue north to meet Talbot, and are intercepted b y Talbot’s soldiers, who escort them the rest of the way. About 8.5 weeks ABA

The company arrives in Talbas and meets Tablot. Rallian tells of the adventure and then claims his right as king. He is supported by the lords of the north. They prepare to march against Lazar. About 9 weeks ABA

Alex takes Tom to The Wall and they return. The land prepares for war. About 9.5 weeks ABA

The army departs Talbas and arrives at Dunnmar, marshalling more forces. Stonebill tells Alex of Lazar’s army movements, and Alex and Hathnor set off to warn friendly forces at the gap of Luthan. About 9.5 weeks ABA

Alex, Hathnor, and guards ride east and south to the gap of Luthan. They are ambushed by men from Lazar, and Hathnor is wounded. Alex defeats the attackers and tends to Hathnor. They reach the camp with Hathnor still unconscious. About 10 weeks ABA

Alex and Hathnor meet with Lords Cafton and Shelnor, allies of Talbot. Alex reveals a traitor among their advisors. Alex magically completes a wall the camp is working on. About 10 weeks ABA

Lazar’s army reaches the gap of Luthan. They are surrounded by friendly forces and surrender. Shelnor learns that Lord Bray’s army has attacked his home town of Ossbo. Alex races for Ossbo. About 10 weeks ABA

Alex transforms into the dragon, arrives at Ossbo, and destroys and scatters Bray’s army. He organizes the healers, makes potions, and tends to the wounded. About 10.5 weeks ABA

Alex spends time at Ossbo then is called to join Rallian near Karmus. He travels there, gives Rallian the Great Ring, and five of the inner lords of Nezza join Rallian. About 12.5 weeks ABA

A feast begins to celebrate Rallian’s return. Alex departs the feast to rest. Later, Alex, Virgil, and Tom find the camp quiet. They discover that Rallian has been captured by Magnus’ forces, with Skeld and Lord Talbot wounded and Dain Goldstone killed. Alex, Colesum, Virgil, Tom, and some guards set off after Rallian. About 12.5 weeks ABA

The company travels to the fortress island in Karmus. Alex finds Magnus, learns something of The Brotherhood’s plans, and learns of Magnus’ plans for Rallian. A magical portal opens and Alex prevents evil from coming through. Magnus escapes through the portal. Alex locates the company and finds Tom, who was wounded. He goes to The Wall and brings Tom back. About 12.5 weeks ABA

Rallian is crowned king of Nezza and marries Annalynn. Alex, Virgil, Skeld, and Tom return to Telous. Alex is summoned to his home to meet with Whalen Vankin. Alex learns that Whalen is close to something and asks Alex to wait at his house until Whalen calls for him. About 5 months ABA