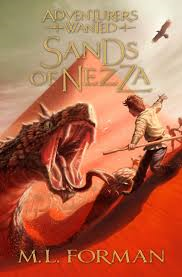 Alex receives a call for help from Skeld, who is imprisoned in Nezza. Alex travels to Nezza, rescues Skeld and his company, and finds a lost prince, Rallian. They all travel to the Oracle, Tempe, and receive advice. They travel to the northern lands to rally forces to help enthrone Rallian, who is the rightful king. The allied forces march south and confront opposing armies, which then join Rallian's forces. Rallian is kidnapped, and Alex finds him and confronts the dark wizard Magnus, learning some of The Brotherhood's plans to conquer the Known Lands. Alex defeats Magnus, and Rallian is crowned king. Alex returns to his home and meets briefly with Whalen Vankin, who tells Alex to be ready soon for an adventure.

See Book 4: The Sands of Nezza—Chapter Summaries for all summaries.

This book has several firsts:

It is also the shortest adventure of the first four books.

Retrieved from "https://adventurerswanted.fandom.com/wiki/Book_4:_The_Sands_of_Nezza?oldid=5740"
Community content is available under CC-BY-SA unless otherwise noted.