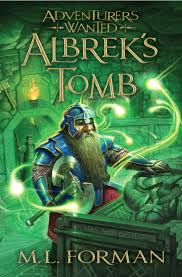 Alex is working in his father’s smithy and meets three smittys who reside there, including Bobkin. Whalen Vankin asks Alex to consider and adventure. Alex learns about the adventure and joins the company, led by Thrang Silversmith. 0 days ABA

Alex meets with the company for lunch, then goes with Arconn to outfit himself for the trip. He gives part of his Dragon’s Bane to the local apothecary. The company dines and formally begins the adventure. 0 days ABA

The company departs for the Great Arch. They pass through into Thraxon and begin their journey to Benorg. 1 day ABA

The company arrives in Benorg and meets King Thorgood. Thrang, Alex, Arconn, and Katrina Dayyed search the archives of Benorg for information on Albrek, and they discover his planned route. About 2 weeks ABA

The company departs Benorg and heads south then east towards the Isle of Bones. About 3 weeks ABA

The company finds a town along their route and arranges to stay the night at a local tavern, The Lost Fiddler. There, Alex confronts and defeats a paladin in a contest of wills. About 3 weeks ABA

The paladin, Bane, tells of his early years and his participation in the ancient Govan civil wars. He is defeated by wizards and transformed into a paladin to seek out and destroy The Dark Shadow, which was responsible for the wars. Alex and Bane discuss the Shadow and a possible conspiracy in the Known Lands.

The company departs the town and continues east. They encounter a stream, and Arconn finds a Nagas. Through Kat, the company learns that the nagas intends to destroy them. The company prepares for battle. About 4 weeks ABA

The nagas attacks the company and is killed. The company locates and collects the nagas’ treasure, including a wizard’s staff. The company sorts the treasure and continues heading east. About 4.5 weeks ABA

The company arrives in Dunnstal, and Alex and Barnabus Martin speak with an old fisherman about the Isle of Bones. They learn of the island’s reputed haunted status. About 4.5 weeks ABA

The company finds passage to the Isle of Bones and sets sail. Alex and Arconn enjoy the waters but the others are seasick. They arrive at the island. About 5.5 weeks ABA

Alex learns that a dragon inhabits the island and killed the dwarfs in both self-defense and rage. Alex leaves the company gathering treasure and spends many days with the dragon Salinor. Alex learns that he himself is of dragon blood and is among the greatest of wizards and dragons. He leaves the dragon and prepares to leave the island. About 7.5 weeks ABA

The company leaves the island and Alex hides it. The company returns to Dunnstal and sets out for Kazad-Syn by heading south to Darvish. While in Darvish, Kat is drawn to The Empty Tower but is stopped by Alex. About 9 weeks ABA

The company arrives in Kazad-Syn. Alex returns the third lost bag to the true heir, revealing an unhonorable dwarf in the process. Alex receives treasure as a reward, and the company learns more about the Lost Mountains, including possible dangers ahead. About 11.5 weeks ABA

The company departs south for the Lost Mountains. They are attacked by the undead Hellerash. Shahree is killed protecting Alex, and in anger Alex issues a spell that destroys all hellerash in Thraxon. About 14.5 weeks ABA

Alex spends time preparing to face the necromancer. He departs into the mountains and finds the caverns. He defeats a hydra and magical bats, converses with the undead dwarf king Set, and defeats and stone golem. He faces the necromancer, an ancient evil named Mog who overtook Nethrom’s body. Alex fights Mog, unleashes the power of the dragon, and wins. Mog is destroyed and Nethrom dies telling Alex something about the Order of Malgor. About 5 months ABA

Alex returns to Neplee and recounts the tale of his victory. The dwarf lords make an oath to answer Alex’s call if ever needed. About 5.5 months ABA

The company continues to winter in Neplee. As spring arrives, they start south once more. Alex gives Kat a crystal he recovered from Mog. They travel across open plain and find a lonely mountain and the deserted city of Albrekin Gal Tock. About 9 months ABA

Kat leads the company to Albrek’s tomb, where they recover the Ring of Searching. They discover that a thunderbird destroyed the dwarfs. They see the thunderbird, and Thrain is taken by it. Alex becomes a dragon, rescues Thrain, and extracts a promise that the thunderbird will never go north again. In return, Alex transforms many rocks into sea life for the thunderbird to eat. About 9 months ABA

Alex returns from the thunderbird and convinces his friends that he is safe. He again transforms into a dragon and the company rides him north. They stop near Kazad-Syn, and Alex and Thrang retrieve the treasure that was being sorted by Thorson, Thrang's brother. About 9 months ABA

The company travels to Benorg. Thrang returns the Ring of Searching and tells the story of the adventure to the dwarfs there. Alex and Thrang meet with King Thorgood and the lords of the dwarf realm, where Alex extracts a promise that the dwarfs will always be friends of the Empty Tower. Alex returns the Crown of Set to King Thorgood, and a traitorous dwarf lord is arrested and imprisoned. The company remains in Benorg for feasts then departs for Telous. About 10.5 months ABA

The company arrives in Telous and ends the adventure. Whalen arrives and takes Alex to his new home in Alusia. Alex meets his new horse, Dar Losh. Whalen leaves and Alex settles in to his new home. About 10.5 months ABA