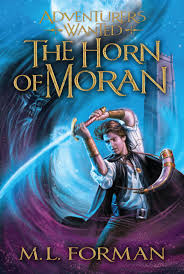 These are chapter summaries of Book 2: The Horn of Moran.

After having returned from his first adventure six months ago, Alex has been living with his stepfather and practicing magic. He has been having nightmares lately. In this chapter, he wakes up from a nightmare. He receives a Geeb from Whalen Vankin and is invited to join a new adventure, lead by his friend, Silvan Bregnest.

(before beginning the adventure)

Alex enters Clutter's Adventure Shop and talks with Mr Clutter. Alex reunites with Bregnest and meets Sedric Valenteen (Val). Alex learns that the adventure is to recover the Horn of Moran, lost near the Tower of the Moon in Norsland, and return it to the rightful king of Athanor in the realm of Alusia. Alex, Bregnest, and Val go to the Golden Swan, and Alex reunites with Anders (Andy) Goodseed and Halfdan Bluevest and meets Sindar the elf, thus completing the company. The old friends catch up on each others’ lives. 0 days ABA

The company begins the adventure and departs to Norsland. They head easterly towards Oslansk. Alex learns more from Sindar about Moon Slayer and the Dark Elves. The company arrives in Oslansk. 6 days ABA

The company meets Andy’s family. Alex and Halfdan reunited with Skeld and Tayo Blackman. Alex visits a dwarf shop and arranges for gifts to be made using True Silver. He confronts a local bully and almost loses control of his emotions and magic but is stopped by a mysterious voice. 7 days ABA

The company dines with the family of Skeld’s and Tayo’s brides to be. Alex talks with the mother, Cara, and learns about the magic of Norsland and the Tower of the Moon. He sees a vision of his future self with another wizard. Skeld and Tayo are married. During the feast, Alex follows a cloacked man, who teaches him a little of magic and warns of pending danger. The man reveals that he is of The Watchers. The company gives gifts to Andy’s little brother, Michael, for his birthday and spends the next days preparing to continue their journey. About 3 weeks ABA

The company departs Oslansk and heads east to Ollvi. Upon arriving, Alex locates the heir of the second lost bag—Tom Cain—and returns it. Alex receives the reward. About 5 weeks ABA

The company continues, now heading north. After a few weeks, they encounter a cliff and rocky plains. There they are assaulted by Goblins and try to escape. Alex is separated from the company and is captured by goblins. He confronts and destroys a goblin shaman (wizard) and the surrounding goblins. After the battle, Alex falls unconscious. About 9 weeks ABA

Alex creates the illusion of a dragon to scare away the goblins. Sindar and Alex free their friends, but three Alusian soldiers who had also been captured by goblins remain bound. Bregnest decides to accept their oaths of loyalty, which Alex seals using magic. The soldiers depart for Alusia, and the company continues the journey. About 9 weeks ABA

The company continues north and enters a Centaurs’ realm. They learn from the centaurs more about the ill-fated prince and the journey to the Tower. They leave their horses with the centaurs and continue on foot. About 11 weeks ABA

The company crosses the frozen wastelands and passes through the enchanted forest. They confront the first guardian—a Sphinx—and Alex answers the riddle. The company climbs the mountain and reaches the Tower and the second guardian. About 15 weeks ABA

12. The Tower of the MoonEdit

Alex awakens in the middle of the night to find Val gone and the company under a spell. He revives Sindar then pursues Val into the Tower, passing the griffins. He finds Val in the Lower Library, which is empty since the books were put into Val’s bag. Alex fights Val and forces The Dark Shadow—which was inhabiting Val—to come out. Val puts himself into his bag, the Shadow leaves, and Alex changes the bag into a breeze. Alex finds the Upper Library, learns more about the Tower and the Horn from the Tower’s guardian. Alex takes the Tower’s treasure and the Upper Library, leaving a token of himself in the Tower. He returns to the company, which is still under a spell except Sindar. Alex and Sindar begin taking the company down the mountain. About 16 weeks ABA

Alex and Sindar get the company to the enchanted woods, where they meet the Brownies. The Brownies promise to heal the company if Alex and Sindar promise not to disclose the Brownies’s existence. Alex spends the winter sorting treasure, reading books, and practicing magic. He also learns of the Order of Malgor from Sindar. As winter draws to a close, they prepare to depart. About 7 months ABA

The company awakens and departs south for Oslansk. They arrive in Ollvi and dine with the Cain family. They depart Ollvi for Oslansk. About 9 months ABA

The company arrives in Oslansk. Alex transforms Otho into an ox, and Otho’s father arranges for recompense to Alex. Alex changes Otho back and the company departs Oslansk west for the Great Arch. About 9.5 months ABA

The company returns to Telous, makes arrangements, and departs for Alusia. They enter Alusia and head toward Athanor. Along the way they rescue another company of adventurers, and Alex treats a wounded adventurer who is part elf: Tara. About 10 months ABA

Tara fails to recover and Alex learns more about her. He travels to The Wall and calls her back. The two companies continue together toward Athanor. About 10.5 months ABA

The companies arrive near Athanor but are intercepted by forces of Prince Varon, who seeks the throne. Alex meets with him and his advisor, Kappa (who Alex turns into a donkey), and arranges a contest between Varson and King Trion. During the contest (which is blowing the Horn of Moran), Varson is revealed as a fraud and King Trion as the true king. The conflict is resolved, the company receives the reward, and the company departs for Telous. About 11 months ABA

The company arrives in Telous and Alex meets Whalen, who asks Alex to take a staff, accept the wizard’s oath, and let Whalen develop Alex’s Rel O’Gash, all things Alex agrees to. Alex’s Rel O’Gash is developed and Alex combines three staffs into one. About 12 months ABA

Alex takes the wizard’s oath in the presence of the company. The company concludes the adventure, and Alex returns to Earth.

Retrieved from "https://adventurerswanted.fandom.com/wiki/Book_2:_The_Horn_of_Moran%E2%80%94Chapter_Summaries?oldid=6001"
Community content is available under CC-BY-SA unless otherwise noted.