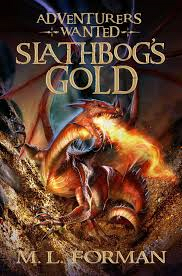 Alex wanders down a street and sees a sign in a bookshop window that changes colors and letters instantly. He enters the bookshop but there are no books. He meets Mr Clutter, who fills out Alex’s adventurer application. Alex then meets Thrang Silversmith and Arconn, who explain about magic, the different worlds, and that Alex is an adventurer. 1 day BBA (see Timeline)

Alex learns about the Adventurer’s Bargain and the quest he will join, a journey to Varlo in the realm of Vargland to slay the dragon Slathbog and recover his treasure. He goes with Thrang and Arconn to Telous and meets with the other members of the company: Skeld, Tayo, Halfdan, Andy, and Bregnest. 1 day BBA

Andy takes Alex to get supplies. Alex learns about magic bags. Mr. Blackburn declares Alex fit for most weapons and especially suited for a staff, a wizard’s weapon. Alex learns he has wizarding potential. He chooses a special sword with a mysterious past. The company has a feast to begin the adventure. 0 days ABA

Alex has breakfast with Andy and Arconn, then meets with the company. He meets his horse Shahree. The company travels to the Great Arch, prepares for the journey, and enters Vargland. 1 day ABA

The company travels south in Vargland. Thrang teaches Alex how to start and stop fires magically. One night the horses are scattered and the company searches for them. Alex encounters a troll threatening Shahree and engages it in battle. Using his sword and magic, he defeats the troll. 6 days ABA

The company watches the defeated troll turn to stone when the light touches it. They then divide the treasure found on the troll and Alex is given a magical ring the troll had. The company then searches for and finds the troll’s cave, in which is a large treasure and seven magic bags that belonged to now-deceased adventurers (lost bags). Alex takes the bags (since he defeated the troll) and promises to deliver them to the heirs. The company resumes the journey. 8 days ABA

The company decides to seek the Oracle of the White Tower and heads east. Alex receives an invitation from the Oracle for him and his company to dine with her, a high honor. They arrive at the Tower, are well treated, and have dinner with Iownan, the lady and Oracle of the tower. She later speaks privately with Alex and encourages him on his adventure. About 3 weeks ABA

The company meets with the Oracle one by one. Alex learns more about oracles and is brought before her. He is told to not doubt himself and that he has great potential. He then finds Arconn and learns more about elves. About 3 weeks ABA

Alex learns of the history and import of his sword, Moon Slayer. Arconn begins instructing him in the elvish language. The company receives gifts from Iownan and pledges to return a stolen seer stone. The company departs the tower and continues the adventure. About 3 weeks ABA

The company enters Techen, sells horses captured from the bandits, and explores the town. About 5 weeks ABA

The company meets with Eric Von Tealo, who gives them information about Varlo and a secret tunnel into the castle. About 5 weeks ABA

The company leaves Techen and travels east. They enter the dwarf realm of Vargland, in the Brown Hills. They meet King Osrik and other dwarves. They dine with them and meet Thrain, a dwarf in the land. About 2 months ABA

The company again meets with Osrik and Thrang tells their story. Alex shows Osrik Moon Slayer and the lost bags, one of which belonged to a dwarf of the land. Alex returns the bag to the heir and in turn receives part of the bag’s treasure as a reward, including some true silver. About 2 months ABA

The company departs the dwarf realm and continues east and south for many days. They camp near the ruins of Aunk, a place of evil. During the night, the company is put under a spell of sleep and Alex is confronted and tempted by The Wraith and other wraiths. He resists the temptation and uses Moon Slayer to vanquish them. He then falls unconscious. About 3 months ABA

Arconn is able to call Alex back from The Wall, but only temporarily. The company rushes through the day to reach the Dark Forest, the elf realm of Vargland. Calysto, queen of the realm, permanently calls Alex back from The Wall. Alex recovers and a feast is held in his honor. The company remains for a long time but then heads east and south once more. About 6 months ABA

The company travels east and encounters the wastelands around Varlo. They leave the horses and continue on foot. They near Varlo and prepare for their assault on Slathbog. Alex finds a plant of Dragon’s Bane and saves it in his magic bag. The company finds the secret tunnel mentioned by Eric Von Tealo and enters the castle that way. They encounter Slathbog’s treasure and prepare to fight Slathbog. They find him and engage him in battle. Alex looks into his eyes and understands Slathbog’s heart, which is full of evil. With Tayo’s help, Alex slays Slathbog, though Tayo is wounded in the process. Alex uses some of the Dragon’s Bane to help Tayo stay alive. Then in anger, Alex uses magic to incinerate Slathbog’s body. About 8 months ABA

The company begins sorting the treasure. Alex finds the crystal of the White Tower and sees into it, trying to learn how to save Tayo. He does, and he then visits The Wall and brings Tayo back. As the months pass, the company sorts and divides the treasure. Once spring arrives, they begin the journey back to Telous. About 1 year ABA

The company crosses the now-reviving wastelands and heads west. They spend much time with the elves of the Dark Forest and then the dwarves of the Brown Hills. They take three dwarves, including Thrain, as they journey towards the White Tower. They visit Techen and fulfill a promise to the now-deceased Eric Von Tealo. They continue west and visit the White Tower, returning the crystal to the Oracle. Alex learns he has the blood of many races in him. He is also accepted as a future apprentice to the great wizard Whalen Vankin. The company departs the White Tower, heading west. About 1 year 5 months ABA

The company returns to Telous and concludes their adventure. Alex goes with Bregnest, Arconn, and Thrang to Mr. Clutter’s shop and there receives some instructions from Whalen for a package he recived from Whalen to start training at home . He then returns to Earth and his home there. He discovers that his guardian was also an adventurer, as was his dad. He receives his dad’s magic bag and prepares for another adventure. About 1 year and 6 months ABA